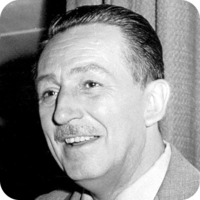 An Animated Biography of the Great Walt Disney

Walt Disney was a dreamer. This illustrated timeline of Walt's life talks about his early years as a young boy who loved to draw, to the talented cartoonist he became when he gave life to the beloved Micky Mouse; through his career and finally his creation of what is today, the world's most visited theme park.

As Walt himself put it, “…it all started with a mouse.” For decades following Mickey Mouse’s creation there were dozens of iconic characters in multiple short films and later full-length feature films.

“If you can dream it you can do it.” was one of Walt Disney's famous quotes.

Walt Disney takes us on a guided tour through Disneyland, from the early days to today. Featuring the Disney song The Wonderful World Of Color, which was the iteration of the Walt Disney anthology series that ran on NBC from 1961 to 1969. Containing very old and rare footage of Disneyland from 1956.

For the Child In All of Us

Disney's films were not created only for children, as he said, "I do not make films primarily for children. I make them for the child in all of us".

This documentary by American Experience PBS is an insight into the man, his films and the empire he built.

Walt Disney was a man with a dream and the resolve to push forward and do it perfectly every time no matter what, even if it meant delays and cost overruns.

When his employees went on strike, Disney felt betrayed, unable to understand how people who worked for him could be unhappy. Years later he referred to them as “communists” before the House Un-American Activities Committee.

The Two Sides of Walt Disney, by Wall Street Journal

Colleagues and acquaintances reflect on the two sides of this legendary personality. Behind his upstanding and likable public persona, Walt Disney had a darker side.

This exclusive clip from the PBS special “American Experience: Walt Disney,” takes a look at both sides of the man who brought magic to the world.

The Carousel Theatre of Progress

Walt Disney hosts a behind-the-scenes look at the carousel which is staged with animatronics depicting a family's move through the decades, from the pre-electric era in 1890 to the modern-day family of the 1960's.

Disney enthusiastically walks us through the scenes and how each character is created using human-controlled animatronics, from a broad gesture to the wink of an eye, and even lip-syncing dialogue. Even the pet dog and the birds seem to come to life!

Bobby Driscoll was the voice of Peter Pan in the 1953 animation, which was based on the 1904 play 'Peter Pan, or The Boy Who Wouldn't Grow Up' by J. M. Barrie.

Peter Pan was Disney's 14th animated feature film. The film was entered into the 1953 Cannes Film Festival. Sadly Bobby Driscoll died at the age of 31 from a drug overdose.

Cultivating the look of artist in public, at home Disney was just plain Dad.<br>He drove his daughters, Diane and Sharon to school each day, read them bed-time stories, and spent hours in lively make-believe play with them at home.

Disney was very domestic and nurturing, quite opposite to his wife Lillian's aloof and reserved demeanor. He often said "I just want to spoil my children" and this was evident in the playful way he brought so much joy into his home.

The Man Behind The Myth

Narrated by Dick Van Dyke, this documentary takes a look back on the life of one of America's greatest enigmas, the pioneer of the American animation industry, Walt Disney.

It's a journey that starts with a shy boy from a conservative and strict upbringing, to the pencil sketch that became a multi-million dollar empire.

The Final Days of Walt Disney

The story of Walt Disney's final days. As a 20th Century visionary, loving husband, father of 2, and grandfather of 6, the legend Disney never stopped dreaming and creating, right up to his final days before his death on December 15th, 1966.

This documentary covers Disney's accomplishments in the last year of his life, including Walt's last visit to Disneyland was just a few months before he died.

Schedule - A Day in the Life of Walt Disney.

About - About Walt Disney & walt.ip.new